How I camped in sub-twenty degree weather and lived to tell about it: 2019 Trip Write-Up

“As an Amazon Associate I earn from qualifying purchases”

I earn a small commission from sales generated from Lion Energy Affiliate links.

Have you ever done something that you always dreamed about but never believed you would do? It was July, and the locations were all very much along the beaten path, but nine years ago, I made my first trip to the west. Sometimes it still feels surreal, like I have not been to places that I have, nor seen the amazing sites that I have seen. This year might have been my most ambitious trip, yet. Almost 7,500 miles, 23 nights, including exceeding my 200th night in the T@b, 8 US and Canadian National Parks and the Icefields Parkway, 8 other T@bbers, and a whole lot of great memories, later, like the other trips, it does not feel real. But, it was very real and altogether glorious.

After working remotely for the day, I headed off for Angola, Indiana, where my uCamp neighbors and new friends, Chuck and Kathy Dowe, graciously hosted me as a moochdocking guest at their lovely Indiana home. Their community reminded me very much of what life in a smaller town is like. Although bigger, and prettier than my own home town, the slow pace of smaller town life felt quite familiar and quickly sent me into vacation mode.

About a year ago, I received a Facebook message from a fellow member of one of the T@b groups on Facebook. I recognized her for owning a T@b about the same age as mine, and always noted that she shared the same last name as my mom’s maiden name. In the message that she and my mother, who sells the custom sunshades for T@bs, had discovered that we were related and that we were second cousins! We agreed to meet up on one of my cross country trips and this trip worked out perfectly. Mary and her husband, Craig, were kind enough to meet me for coffee. It was a short, but great time.

From Iowa, I made my way further westward and after a couple of evenings at KOAs along the interstate, I finally arrived in the Tetons, to a campsite that has been on my radar for about four years. I had braced myself for the likelihood that this now popular boondocking spot in the Bridger-Teton National Forest was likely to be busy and my expectations were met. It was busy, but still a wonderful campsite. On a high plateau rising above the floor of the Snake River valley and below the Mt. Leidy highlands, you will find a Forest Service road lined with dispersed camping opportunities. This was a great spot for Rocky to be able to disperse of his pent up energy from four long days in the car and enjoy quality, carefree time playing fetch and exploring.

Joining me before the end of my stay in the Tetons was my friend, Kim, and her new-to-her Dutchman T@b 320. Kim battled through several minor setbacks before finally finding her way into the same camping area.

After nine years of fairly normal weather, I finally hit those more rare, but not unheard of occasions that people warn you about in the Rockies. I had been hearing rumblings of mountain snow, but not seriously studied that impending weather until Kim arrived. We discussed the impending storm and worked our way northward, through Yellowstone, spending a night moochdocking at the beautiful home of a friend of Kim’s, that overlooked Helena, MT (Thanks, Robin!!)

Sitting down to dinner in a diner that reminded me of Mel’s Diner of sitcom fame, I received a text from my sister-in-law, Nina. Two Medicine was closing at noon, tomorrow. Yes, the same Two Medicine where we had planned to camp for four nights. I thought, “No big deal, we can camp St. Mary.” But a quick look at the Glacier National Park social media sites revealed that although St. Mary would be open, the National Park Service advised against camping. Weather models were showing that up to 4′ of snow could accumulate.

At that point, my expertise was spent and thought it would be wise to consult locals as to what the best course of action was. Nina came back with a commercial campground in West Glacier, that Sean, who was the owner of the RV that Scott and Nina were renting had recommended. The next morning, while I stocked up on supplies and bought a shovel, Nina contacted the campground who assured her we could come and they would not leave us stranded, so off towards the Lewis Range, I drove, while Kim stayed on for a few more hours to deal with a broken ceiling fan and dead battery in her tow vehicle.

As the day was approaching a close, I arrived at Glacier Campground, just outside of the Apgar entrance to Glacier National Park. This was a beautiful, wooded campground with very private sites. The owner seemed to be amused by our enthusiasm to camp in this crazy weather and graciously allowed us to stay past their closing date and even gave us discounts! This campground felt more like a forest service campground with hookups than a commercial campground.  Our experience at Glacier Campground was five-star and I would definitely camp there, again.

Kim and her cousin decided it would be fun to try camping in St. Mary. I still don’t get it, but you can read about it, here. After that departure, we met up with Kim for one other night in Banff, but she was otherwise, a brave new T@b owner out on her own (and sometimes with her cousin.)

All in all, we received no measurable snow in West Glacier but it was an easy place to camp and make day trips to the snowy areas. While in Glacier, the temps took a major dive, below 20 degrees at night and in the 20’s during the day.

Dear Canada…..I think I love you

Next, we traveled to Banff, where I camped at the Lake Louise Campground. This campground reminded me more of some of our busier NPS campgrounds where you are very close to neighbors with little privacy. Temperatures remained quite cold, and below freezing. Snow squalls followed us pretty much the entire time we were in Canada and it did not warm up until the day we left Canada. We took a quick drive up the Icefields Parkway, I camped a night at Wapiti Campground in Jasper, and then back down the parkway for a night at Tunnel Mountain II before our return trip to the US. While at Tunnel Mountain, I had the pleasure of meeting up with T@bber, Jennifer Tipping-Paulin and her partner, Scott. There were 4 T@bs and a T@g in the campground that night!

While at Tunnel Mountain, I learned that another major snowstorm was expected to hit Montana and the plains. When we returned to West Glacier, I realized I needed to make my way east if I wanted to be back at work on Monday, the 14th, so I headed towards Billings, where I took advantage of a late meal and overnight parking at Cracker Barrel before continuing on to to Spearfish, SD. My logic was to get as far east as reasonable before the high winds arrived.

I arrived on Tuesday, with near 80 degree temperatures and secured a spot at the KOA, which was the only campground open this late. I had electric, sewer, cable, and wi-fi and access to the single bathroom in the office. The staff was rushing to get the water lines cleared and dealing with a broken air compressor. Temperatures plummeted on Wednesday and were in the teens by Thursday AM. The winds arrived on Wednesday, and I was glad to be stationary after dealing with high winds while driving from West Glacier to Billings.

I departed Spearfish on Friday, pulling out of the snow, easily, with my Jeep, and headed east on I-90. I thought it might be nice to make a stop at the Badlands, but the road to the entrance was more snow-covered than not, so I turned around and headed east, where I lost count of how many semi’s and cars I saw in the median from the westbound lane. The highway had frequently iced over from the wind blowing the snow and the high winds had toppled many high-profile trucks. I contemplated pulling over, but I deduced that all the mishaps seemed to be impacting westbound traffic and that the T@b was significantly lower in profile than what I had seen. I also had to keep moving to make it back for work, so I pressed on to Sioux Falls, SD, where I tried my hand at another KOA. I wanted shore power so that I could warm up the T@b as quickly as possible. It was not a great KOA. Practically right on I-90, there was substantial truck noise, all night. However, I did get the T@b all toasty, despite being caked in frozen slush from my Badlands excursion.

When I departed Sioux Falls, I was disheartened to see that the snow and high winds were following me into Minnesota, so at Albert Lea, I headed south into Iowa, where the weather followed me for about an hour, before gradually warming up into the 50’s. Energized by clear roads, I kept going until I reached The Cracker Barrel in Elkhart, IN, just before they closed to pick up my take-out dinner order and retreat to the T@b to warm it up and give Rocky his supper, too.

Is it ever really the end?

If you have made it this far, thanks for reading. This trip was not at all how I planned it, but it was filled with wonder and amazement and one of the most awesome experiences of my life. And, in case you are wondering I have started thinking about my 2020 adventures, already.

So, now, the burning question: did I winterize? Nope. Here are the important details:

1. First and most importantly: I have a 5 gallon freshwater tank that is inside. That means I was able to keep that cupboard door open and everything was good.

2. I kept the bathroom door ajar.

3.  I used the sink, shower, and toilet, but kept RV antifreeze in the p-traps, especially starting in Spearfish.

4. I kept the bed made to allow the warm air to circulate more freely.

5. I kept the T@b heat higher than I prefer (remember, I like it cold.)

So far, I have discovered no apparent damage. It was a calculated risk to use the T@b plumbing without winterizing and I cannot comment on whether you would have similar experiences or not, especially with the outside freshwater tanks.

Will I winterize this winter? Absolutely. The T@b did well when I unexpectedly ran into bad weather, but I have concerns about spending more than a couple of weeks in such cold temperatures. The plex piping seems to be solid, but the toilet fill line is a known vulnerability. 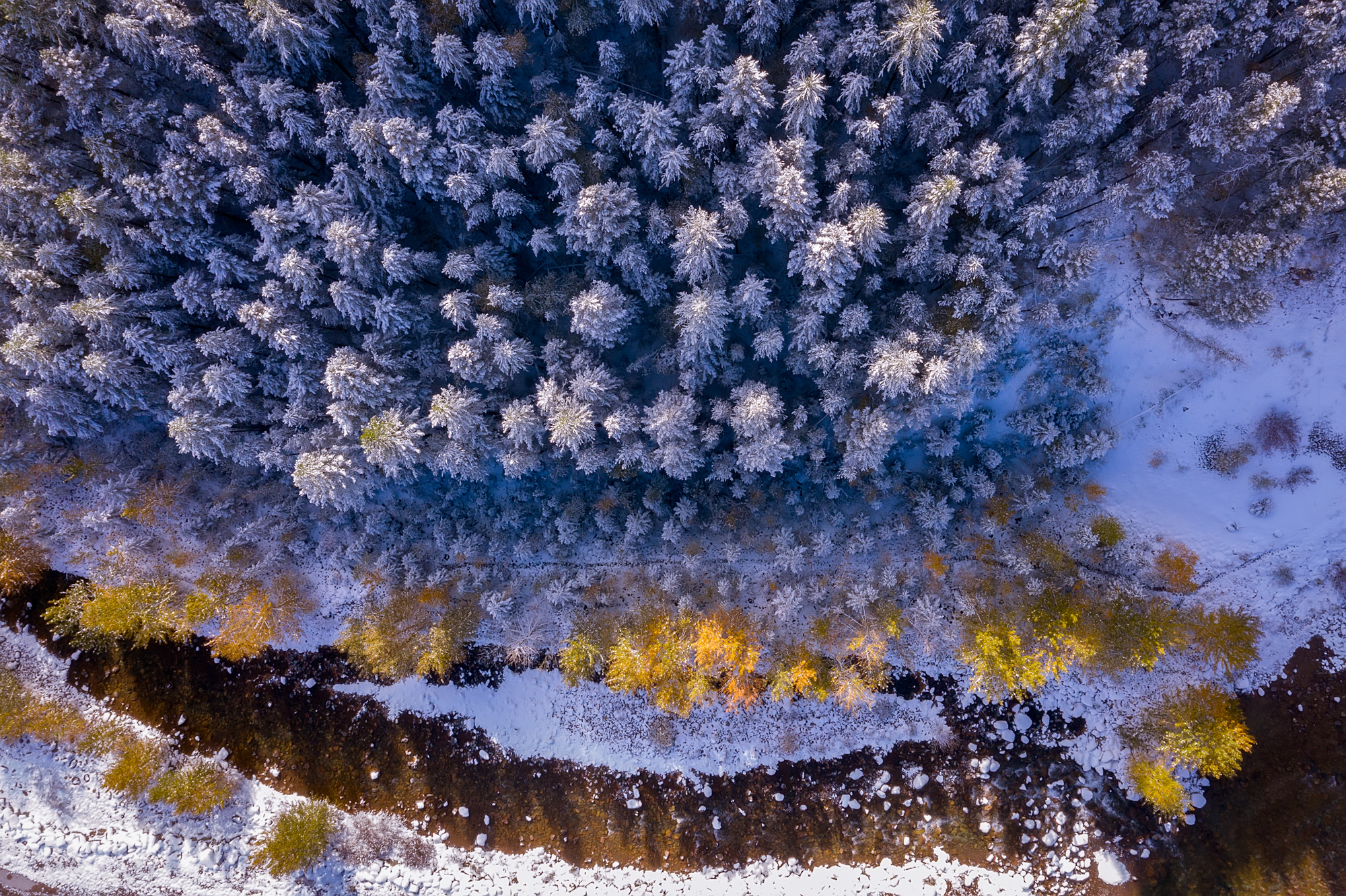 Your purchases through my Amazon affilaite links help me offset my costs. Thanks for your support.

“As an Amazon Associate I earn from qualifying purchases”